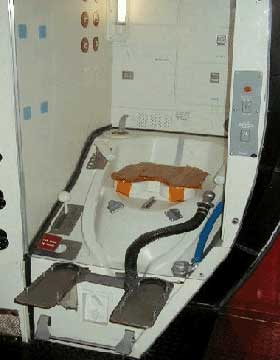 Shuttles are equipped with vacuum toilets that work a little like a vacuum cleaner.

Water cannot be used in the weightless environment of space so, like wash basins, toilets on the space shuttle can’t use water. In a corner of the shuttle’s mid-deck there is a toilet for use by both men and women. Although it looks like any other toilet used on Earth, it is a little different. To make sure what goes into the toilet doesn’t come out, it is sucked away and then vacuum-dried. The system is a little different depending on whether the astronaut urinates or defecates. When urinating, the waste is sucked away in a hose. But when defecating, the toilet is used the same way as a normal toilet and the astronaut pulls a lever to have the waste sucked away.

In the past, astronauts had to use bags instead of toilets and they needed considerable toilet training. 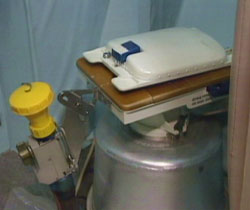 Space Shuttle toilets are said to be a little difficult to use and require some practice. But even so, this is a big improvement on the past. For the first astronauts, whose stays in space were all short-term, the astronauts all wore diapers and their waste was collected in bags and taken back to Earth. Most astronauts were more than a little unhappy with this situation. Unlike on Earth, pushing alone does not allow the astronauts to defecate. Even when they do manage to get something out in a weightless environment, it often flies around the ship, gets stuck on bodies and other parts of the shuttle, or simply floats, meaning that astronauts need to have quite a bit of training before they are capable of using shuttle toilets. But even now, during take-off, re-entry or during a space walk, astronauts must wear pressurized suits and can’t use the toilet, meaning they must wear either diapers or have a bag to catch their waste.

Previous: Toilet Paper – The History ‘Behind’ It
Next: Viking Range Expands Dishwasher Recall Due to Fire Hazard